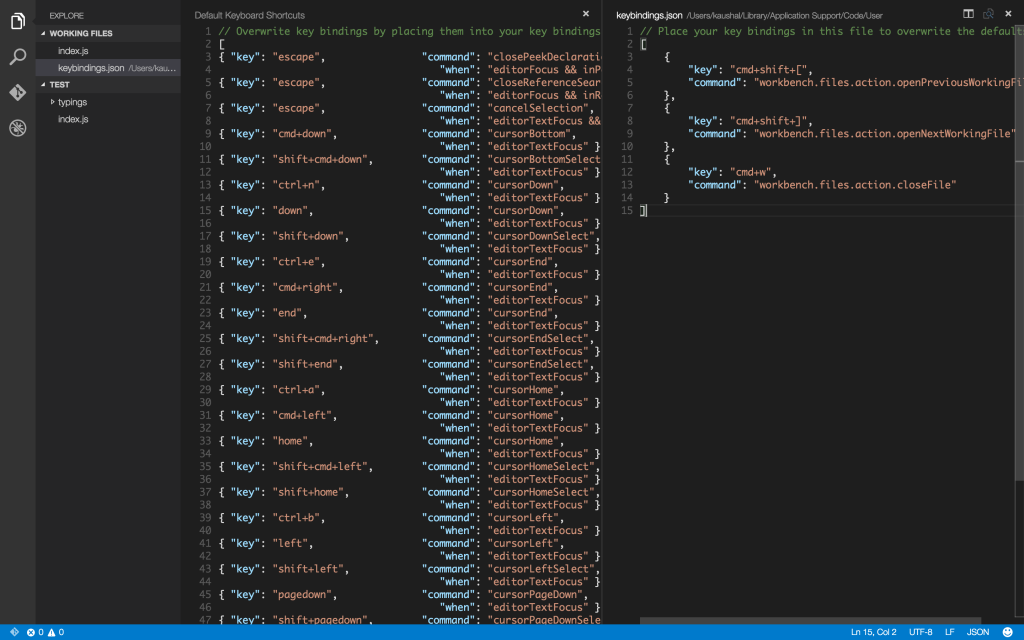 Microsoft recently released a new open source text editor called Visual Studio Code. It is based on Github’s Electron platform and is a cross platform application that runs on Windows, Linux and Mac OS X which is surprising considering it came from Microsoft. Surprisingly, it is a great editor when it comes to working with JavaScript and Node.js and basically anything front end (React, Angular…).

One major gripe I had with it that was stopping me from making it my default editor for web application projects was that it used a concept of “Working Files” instead of tabs like most editors I have come across. It works fine once you get used to it, but since I was not using it as my primary editor for everything, it was hard going back and forth between tab based editor and VS Code. My main issue was that I could not switch between working files easily with the almost universal keyboard command to switch tabs “CMD + SHIFT + [” and “CMD + SHIFT + ]”. Also pressing “CMD + W” would close the file from the editor but not remove it from the “Working Files Section”.

After spending a few minutes looking at the documentation for key bindings, I changed a couple of things to make it work like any other tab based editor. Open up your key preferences json file (by going to Preferences -> Keyboard Shortcuts) and paste or add the following:

Let me know if you have a better way of doing this or any other suggestions!

Thank you for that blog post. This was exactly what I’ve been look for. I used those settings in Windows to enable ctrl[+shift]+tab too:

Glad I was able to help 🙂

Thanks a lot. This is really useful.

Thank you! I will get the blog post updated by tonight.

Thanks! This saved my time 🙂

Thanks for sharing this.